Patricia de Lille has a long history of being active in South African politics, but her more recent years, as Mayor of Cape Town, South Africa’s fourth-largest city, and the country’s legislative capital, haven’t been too kind to her.

Born in Beaufort West, in the Western Cape, she became involved with the South African Chemical Workers Union during her first job as a laboratory technician, eventually becoming the Union’s regional secretary, and then National Executive Member in 1983.

In 1988, she was elected as National Vice-President of The National Council of Trade Unions (NACTU), the highest position for a woman in the trade union movement at the time.

In 1989, de Lille was elected onto the National Executive Committee of the Pan Africanist Movement (PAM). In 1994, she led a delegation in the constitutional negotiations that preceded South Africa’s first democratic election in 1994, and was then appointed the position as Chairperson of the Parliamentary Committee on Transport, a position she held from 1994 to 1999. She also served on various portfolio Committees including Health, Minerals and Energy, Trade and Industry, Communications, the Rules Committee, and the Code of Ethics.

de Lille led the call for an investigation into alleged corruption in the South African Arms Deal, an effort that garnered her a great deal of respect amongst South African citizens. She said she was, however, accused by some of being unpatriotic and embarrassing the country as a consequence of her efforts to investigate the Arms Deal.

The ID positioned itself in the center of the South African political spectrum, espousing a conservative liberalist ideology. The party stated that, if elected to power, it would focus on combating crime, makeing South Africa a leader in renewable energy, and financing a minimum social grant by taxing luxury goods, tobacco, and alcohol. 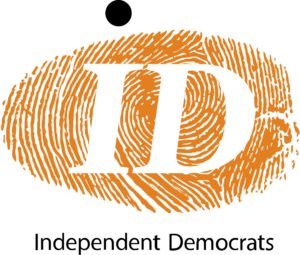 Logo of the now-disbanded Independent Democrats

In 2010, de Lille formed an agreement to merge with the country’s opposition party, the Democratic Alliance, into which the ID was absorbed. The deal was made in partnership Helen Zille, then-DA leader, and current Premier of the Western Cape. As a result, the ID did not contest the 2011 local elections as a separate entity, instead fielding its candidates on the DA’s ballots. In February 2012 then-DA parliamentary leader Lindiwe Mazibuko reshuffled her shadow cabinet, which included appointing members of the ID to shadow portfolios for the first time. This was seen as a move towards strengthening the cooperation between the two parties, heading towards the completion of the merger, which occurred in 2014, when the ID officially disbanded as a separate political organization.

During her time as leader of the ID, de Lille also served as Minister for Social Development of the Western Cape, from 2010 to 2011.

In mid-2011, de Lille succeeded DA member Dan Plato and was appointed Mayor of the City of Cape Town, a position she still holds.

In recent months, de Lille has come under fire for potential misconduct, amidst a broad investigation into numerous of Cape Town’s management executives. The independent investigation, conducted by law firm Bowman Gilfillan, is focused in part on irregularities relating to the ongoing Foreshore Freeway project’s tender process,. The project is aimed at revitalizing a section of the city’s Central Business District and easing traffic flow. Cape Town has the worst traffic in South Africa, and, according to the latest TomTom traffic index statistics, is the 48th worst city for traffic in the world.

After numerous DA party members asked de Lille to resign, the DA’s Federal Executive reviewed feedback from the Mayor as to why she believes she should remain in her position, and decided to charge her with alleged misconduct. The Mayor will be investigated by the DA’s Federal Legal Commission, to which she will be afforded an opportunity to present her case.

These current events stand in contrast to the positive recognition that the Mayor has received over her years of political involvement. A Markinor survey conducted in 2004 found that de Lille was South Africa’s favorite politician, after Thabo Mbeki. In the same year, she was voted 22nd in the Top 100 South Africans series that aired in the country on national TV. Also in 2004, she was awarded the Freedom of the City of Birmingham, Alabama, and was awarded the honour of being one of the Top 5 Women in Government and Government Agencies. She was also awarded the 2004 Old Mutual South African Leadership Award in the Category of Woman Leadership.

In July 2006, she was the first woman to be recognised as Honorary Colonel of 84 Signal Unit in the South African National Defence Force. In August 2006, she received the City Press and Rapport Newspaper award as one of top 10 women in South Africa. At the invitation of Kofi Annan, former Secretary General of the United Nations, de Lille was the only South African Member of Parliament who attended the United Nations Millennium Project, hosted by the Earth Institute at Columbia University, in New York City.

It remains to be seen what the future holds for Patricia de Lille’s political career, with the next hurdle along her path being the feedback she receives from, and defense in front of, the DA’s Federal Legal Commission, relating to the Bowman Gilfillan investigation. As it stands, Cape Town, in the midst of its worst drought in recorded history, may have a new Mayor take the helms sooner than expected.

For information about how Relocation Africa can help you with your Mobility, Immigration, Research, and Remuneration needs, email marketing@relocationafrica.com, or call us on +27 72 763 4240. 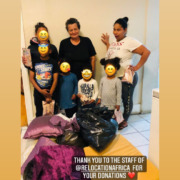 Zimbabwean Elections to be Held In 5 Months
Scroll to top