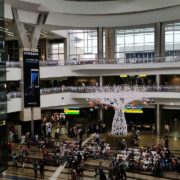 Home Affairs Minister Malusi Gigaba says he plans to meet with Transport Minister Blade Nzimande over plans for Airports Company South Africa (ACSA) to deal with long queues and other issues at immigration at the OR Tambo International Airport.

Gigaba held a meeting with officials at the airport on Wednesday morning and walked over to the immigration point of entry.

Gigaba has told ACSA and OR Tambo International management that he doesn’t want to be persuaded against launching pilot projects that could improve services at the airport.

“I’m saying all of this as a way of telling you what I want to see happening. I can’t be persuaded against that.”

Gigaba says plans which include technological systems to eliminate long queues at points were supposed to be implemented during the next financial year, but he wants them to go live sooner.

“Initially the delay was on our side, but I would like them to be brought forward so that we can start piloting them and ensure that we provide quality service to our clients.”

These systems include e-visas, which will enable travellers to apply for visas online, and e-gates, which will allow self-service at airports.

Cape Refugee Centre To Be Reopened
Scroll to top