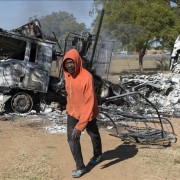 Shops owned by foreigners have been looted during third day of protests against a decision to replace the city mayor of South African capital Pretoria, a Somali community leader told Anadolu Agency on Wednesday.

Amir Sheikh, chairman of the Somali community board, said several shops belonging to Somalis and others foreign nationals had been looted Tuesday night and Wednesday morning.

“We are surprised why protesters have suddenly turned against foreign-owned businesses when the actual cause of the protest was the replacement of the city mayor,” Sheikh told Anadolu Agency.

He said over 100 such shops had been looted since protests began Monday in the townships of Mamelodi, Atteridgeville, Ga-Rankuwa and Mabopane, all located to the north of Pretoria.

“We have managed to help 300 of our nationals to evacuate their goods for safekeeping in Pretoria west,” he said via telephone.

Police confirmed in a short statement Wednesday that looting continued in parts of the city overnight and early Wednesday.

The law enforcement body also confirmed that two people had been killed in Mamelodi township Tuesday night during ongoing unrest.

Kidnap a major risk for expats in Nigeria
Scroll to top