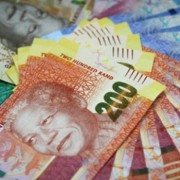 Stocks closed slightly higher led by a stronger gold sector benefiting from weakness in the rand.

By the close of the market, the rand weakened to its lowest in almost a month down 4% to 14.43 per dollar.

The currency fell sharply after prosecutors said Gordhan must appear in court next month over allegations he broke public finance rules by granting a colleague early retirement.

In December, President Jacob Zuma replaced the then finance minister with a politically loyal unknown, but within days appointed Gordhan after an investor backlash.

The latest political instability comes as the finance minister is expected to deliver his medium-term budget policy statement, in just over two weeks.

“A much weaker currency will add to inflationary pressures, and could force us to revaluate our view that the South African Reserve Bank’s tightening cycle has come to a close,” said Capital Economics economist John Ashbourne.

Government bonds weakened alongside the currency with the yield for the benchmark issue due in 2026 rising 23.5 basis point to 8.93%.