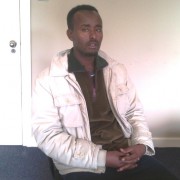 In 2014, GroundUp reported that Nuur had been a victim of armed robbery [in that article he used a pseudonym] in Khayelitsha. A bullet rendered his right arm useless, and he is unable to lift things with it.

“When it is a cold day, I feel a lot of pain,” he says. He goes to the clinic in Mfuleni for painkillers.

Nuur relocated to Delft, where he again established a spaza shop with the assistance of family members. But last month, he was a victim of armed robbery for the second time in 14 months.

Nuur had ordered groceries and decided to offload them at his spaza shop the following morning.

“While I was offloading the groceries from my car, around 7 am, four guys opened fire on me. Luckily, they missed and I ran away. They went away with my Toyota Conquest and all the goods I had ordered,” he says.