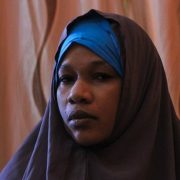 Port Elizabeth – Aisha Ali Noor, 29, sits on the bed in her dimly lit first-floor apartment on Durban Road in the Port Elizabeth suburb of Korsten. It is 07:30 and outside her window the road is already alive with activity as shop owners and traders load their bakkies with goods from the numerous Somali wholesalers that line both sides of the street.

“I’m afraid all the time,” Noor tells GroundUp via a translator. “I don’t go out anymore unless I have to. I’m worried I will be killed.”

Noor came to South Africa in 2011 after losing both her parents in Somalia. She left four children back home and joined her husband in Port Elizabeth.

In 2014 Noor’s husband and his business partner were stabbed to death in front of her in their spaza shop in Motherwell, Port Elizabeth’s largest township.

Noor managed to escape, but she says she has been robbed and assaulted “six or seven times” since then. She showed GroundUp a number of police statements and case dockets that support her claims. In the most recent incident, which was reported on February 26, she was so badly beaten that she had to be hospitalised.

According to Fwamba Mukole, manager of Port Elizabeth’s Refugee Centre, a United Nations-funded project, Noor’s experiences are far from unique in the city, which has an estimated Somali population of around 6 000.