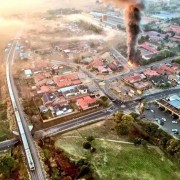 At least two people are said to have been fatally shot following renewed unrest in Pretoria’s (Tshwane) Mabopane township, in South Africa, on 22 June. The shootings are not currently believed to have been related to clashes between police and protesters on the day, wherein security forces reportedly used rubber bullets to disperse groups of looters.

An official investigation into the killings has been launched. Meanwhile, at least 40 people have been arrested in connection to the ransacking of foreign-owned shops in the area. Tensions remain elevated in Mabopane following the unrest and associated violence; a heavy police presence is expected to remain in the area for the immediate-term.

Analysis
The aforementioned unrest followed significant agitations in the greater City of Tshwane Metropolitan area since late 20 June. Factional disputes over the ruling African National Congress (ANC) party’s mayoral candidate for the 3 August local elections triggered violent and disruptive protests in a number of townships in and around the city of Pretoria, including Atteridgeville, Hercules, Mabopane, Mamelodi and Soshanguve, on 20 and 21 June.