The South African government has announced measures to relax visa rules for Kenyan travellers as a fresh move to strengthen bilateral ties.

South Africa will also issue study visas for the duration of study (including extending permanent residence to those studying within the critical skills category) and remove transit visas for travellers transiting through South African airports, the DHA said in a statement.

The DHA made the announcement as SA Minister of Home Affairs Malusi Gigaba was paying a three-day visit to Kenya.

Gigaba held talks with Kenyan officials on bilateral, regional and multilateral issues of mutual interest, including updating each other on the various respective initiatives being undertaken to fight trans-national crimes such as terrorism, drug-trafficking, illegal arms, money-laundering and illegal migration.

“These are issues that continue to be constraints on implementing free movement of travellers,” it said. Endit.

This comes after two years of back and forth between the two countries placing meausre on issuance of visas making it almost impossible for ordinary citizens of these economic powerhouses to visit each other, than it would be for either country’s citizens to visit Britain or the United States.

South Africa introduced a raft of changes to its visa regime in 2014 May making it impossible for all foreigners to renew their visas within its borders, of course with the exception of Zimbabweans under the special dispensation regime.

Kenya has not been issuing visas to South Africans at the port of entry making South Africans wait for a week before travelling into or transiting through Kenya. 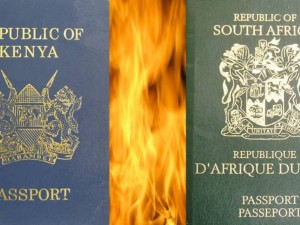