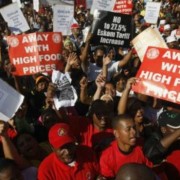 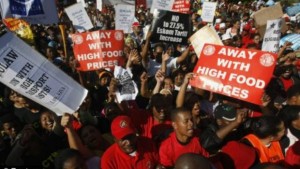 Grain South Africa on Friday again raised the prospect of “food riots” as a result of an expected hike in food prices caused by persistent drought conditions in the country.
Briefing Parliament’s portfolio committee on agriculture, Grain South Africa CEO Jannie de Villiers said South Africans should brace for a tough year ahead as the country was set to import millions of tonnes of grain as a result of low yields brought on by the drought.
“We have done a study of what happened in 2007/2008 in the world where the Arab spring took place and there’s some work being done that says there’s a high correlation when you’ve got high food prices and food riots. There’s a big possibility that it could happen in South Africa,” said De Villiers.
“When we look at what’s going to happen to food prices, we see it’s going to increase substantially and there might be that there’s going to be some public revolt about that.”
The biggest challenge for 2016, according to Grain SA, was to bring enough food into the country.
South Africa’s agriculture department predicts South Africa would have to import 3.8 million tonnes of maize to keep the nation fed.
– See more