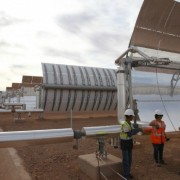 South Africa is Africa’s clean energy frontrunner. Since 2011, it has invested 249 billion rand ($16.348 billion US) in wind and solar technology.

Around the world, $335 billion US has been invested in renewable energy – including wind and solar technology – following the crash of oil and gas prices, according to Michael Liebreich, who spoke during African Utility Week at the Cape Town International Convention Centre. Liebreich is chairman of the advisory board at Bloomberg New Energy Finance, which provides information on clean energy to investors, energy companies and governments.

Business mogul Bill Gates in November committed $2 billion of his own fortune to research and development into clean energy, Liebreich said.

Clean energy investment is on the rise, and wind and solar energy will continue to become cheaper, he added.

Changing to clean energy is like rebuilding an airplane engine in mid-flight, Liebreich said. “In Africa, it’s even more difficult. Here, you’re attempting to rebuild the engine when you’re taking off. That’s a great challenge.”