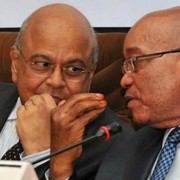 Political infighting in South Africa is scaring off lenders from state-owned companies and potentially weakening everything in the economy from electricity to agriculture.

Citing factional fighting among political leaders, South Africa’s largest debt manager, Futuregrowth, halted loans to state companies on Aug. 31. On Sept. 1, the Danish Jyske Bank announced that it too would no longer lend money to the national power utility over concerns about governance.

The country’s credit ratings could be at risk. Political analysts say the ongoing tension between president Jacob Zuma and finance minister Pravin Gordhan, head of the National Treasury, could lead to the arrest of Gordhan as well as threaten the independence of the Reserve Bank. That, as well as the government’s power over state companies, has rattled lenders.

“We have observed recent reports which strongly hint of conflict between branches of South Africa’s government, the possible machinations of patronage networks, and a seeming challenge to the independence of the National Treasury,” Futuregrowth said in a statement.

The asset manager said it was particularly concerned by reports that president Zuma would head a committee to directly oversee state-owned companies.

The rand weakened 1.5% after the Aug. 31 Futuregrowth announcement and bond yields soared of two of the state’s largest companies, Eskom, the national power utility, and Transnet, the national rail and ports operator, according to data compiled by Bloomberg.