The amended act has new rules for refugees and asylum seekers in South Africa.

Speaking to Clement Manyathela on the Xolani Gwala Show, Dr Motsoaledi explains the new rules in the act. “We have added more exclusions on when can you get exclude for applying for asylum. In the new act we expel you if you commit fraud because when you defraud documents, you destroy the sovereignty of the country and undermine everything Parliament has done”, Motsoaedi said.

Motsoaledi says changes to the laws are much broader than what has been covered in the media. He explains that the act includes several updated definitions, including what it means to classify as a dependent.

According to Motsaoledi, applicants will be excluded if:

He said when he had asked the Department of Basic Education why immigrant children were barred from school, he had been told the department was scared of Home Affairs inspectors. “That can’t happen in any modern democracy. I told them Home Affairs inspectors must not visit any schools unless there is a crime committed that needs Home Affairs. It’s more dangerous to have a child who is not in school.”

“Send them to school … We’ll look at the documentation later.”

He was speaking to GroundUp after briefing a joint meeting of the portfolio committees on Home Affairs and Cooperative Governance and Traditional Affairs recently.

Motsoaledi told GroundUp that the three special permits which were issued to legalize the status of nationals from Lesotho, Zimbabwe and Angolans already living in South Africa, will be renewed.

“Unfortunately the Zimbabwean permit was for four years and the situation never became normal in those four years. We will renew, but we can’t automatically as the department. We have got to discuss with the cabinet.”

“The issue of migration is not purely a problem of Home Affairs as the mayor of Johannesburg would like people to believe,” said Motsoaledi. “It talks to many government departments because it talks to economy; it talks to job creation; it talks to inequality; it talks to unemployment – all those issues cannot be resolved by one department which is called Home Affairs.”

“We have accepted long ago that our borders are porous. We have presented to Parliament before that we are going to spruce up the Border Management Authority. We want to bring that forward,” he said.

In 2009, the South African government introduced a Dispensation of Zimbabwean Permit (DZP) to legalize the many Zimbabweans already inside the country because of the political and socio-economic situation in Zimbabwe. In 2014, the DZP was renewed and renamed ZSP (Zimbabwean Special Permit), which expired in December 2017. The ZSP was replaced with the ZEP (Zimbabwe Exemption Permit), which will expire in 2021.

The ZEP entitles the holder to study or conduct employment, but does not entitle the holder to the right to apply for permanent residence, irrespective of the period of stay in South Africa.

A similar dispensation was extended to nationals from Lesotho and Angola. 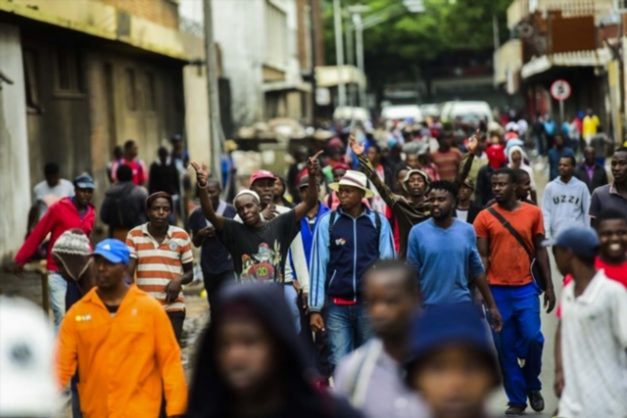 The problem is attributed to porous borders where illegal migrants cross, and they then place huge strain on services and infrastructure.

A government report has suggested that beside a battle with limited resources, an influx of international migrants has put further strain on Gauteng’s services.

The report found that Gauteng was not only saddled with having to accommodate internal migrants from the rest of the country, but it was getting overwhelmed by an influx of international migrants who have to depend on its health and education resources.26

The scathing report is a joint investigation by the National Council of Provinces (NCOP) and Gauteng Provincial Legislature (GPL) into the impact of migration on service delivery in Gauteng.

The probe found that 47% of international migrants settled in Johannesburg without valid documentation and placed a strain on its limited resources.

Gauteng’s population is known to increase at the highest rate in the country due to an influx of migrants from other provinces and foreign immigrants into urban areas including squatter camps.

The contents of the investigation were revealed by Charity Moyo, spokesperson for the Democratic Alliance (DA) Gauteng premier candidate Solly Msimanga’s campaign.

“This is placing a huge strain on the city’s infrastructure, as well as services such as education and healthcare,” Moyo said.

She said the influx of foreign migrants resulted in the province’s schools struggling to absorb the increasing number of applicants yearly.

Moyo further revealed that Gauteng needed approximately 142 new schools to deal with the current demand – a number which does not take into consideration the yearly influx of new students into the province.

The report, which followed a joint visit by a group from the two institutions, found that Charlotte Maxeke Academic Hospital was the worst affected by the situation.

The problem was attributed to the porous borders where illegal migrants crossed and when they fell ill inside the country, they became a burden on the Gauteng health system – which was already crippled.

Moyo said uncontrolled immigration was putting a strain on Gauteng resources like the hospital, because migrants were unable to pay for their bills while the healthcare facilities were not enough to cater for additional patients.

“The hospital is forced to house undocumented foreign patients at a cost of R4 500 a day.

“Most of these patients are also unable to pay their outstanding bills.

“In the 2017/18 financial year, the Charlotte Maxeke Academic Hospital had to write off about R1 billion due to unsettled debt,” Moyo said.

“It is clear that South Africa can ill afford not to secure its borders as uncontrolled immigration is violating the rights of the ordinary residents of this province who have to compete for services.

“This problem has been compounded by the widespread corruption within the department of home affairs which has led to an immigration system failure.”

Moyo accused the ANC government of being incapable of ensuring law and order, rooting out corruption and managing the real problems that Gauteng faced, instead of only caring about enriching themselves.

“This is not what we were promised. We need leadership and change capable of ensuring equal access to opportunities for all South Africans,” Moyo said.

“The DA will fight corruption, fix the police force to be honest and professional, create fair access to real and long-term jobs, secure our borders and speed up the delivery of basic services.”

The permanent delegates of the NCOP and members of the provincial legislature visited service delivery sites in Ekurhuleni, Johannesburg, Tshwane and the West Rand district municipality from September 17 to 21.

The visits were in preparation for the upcoming “Taking Parliament to the People” programme expected to take place in November and were held under the theme “Impact of migration – deepening cooperative governance for accelerated service delivery and development”.

The NCOP said the information acquired during the preliminary visits and public meetings would be compiled and submitted to the executives in all three spheres of government for their interventions prior to the parliamentary session due in Gauteng in November.

A statement from parliament read: “This is one of the flagship programmes of the legislatures through which they exercise oversight on the executive, while also promoting citizen participation in governance.”