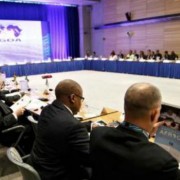 Rwanda, one of Africa’s fastest growing economies, has called on the United States government to grant easier access to traders from across Africa doing business with America market under the renewed African Growth Opportunity Act (AGOA).

The East African nation is one of the beneficiaries of AGOA, the signature trade initiative by the US government to allow at least 7000 products from 39 nations in Sub Saharan Africa to America market duty-free.

“The process of acquiring visas remains lengthy even if we qualify through that trade window (AGOA). This doesn’t look good for companies seeking to make use of that market,” The New Times quoted Joselyne Bazubagira, the head of products at Kaliza Fashion and Design, a clothing company from Rwanda.

Erica Barks-Ruggles, the US Ambassador to Rwanda said that the US government has been trying to ease visa acquisition for AGOA traders.

The two spoke when Trade and Industry officials from Rwanda and the US launched the renewed AGOA action plan in Kigali, the country’s capital, on Tuesday.

In the review, US President Obama added 27 products to the list of duty-free imports into American market from the region, in June this year. The products included clothes, footwear, agricultural products, chemicals, steel and motor vehicle parts among others.