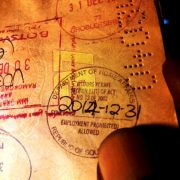 Nine Zimbabweans arrested on their way home to Zimbabwe have been held since 21 August in police cells in De Aar as “illegal foreigners”.

The Zimbabweans were travelling home in a minibus taxi . One of the nine was separated from his three children and pregnant wife, who were allowed to continue their journey.

Those who were not detained waited for three days outside Hanover police station for the release of their travelling companions. One woman became dehydrated and fainted several times. She later died after they crossed the border. Masvingo Central Police Station confirmed the death of the 35-year-old woman as a result of natural causes.

The detained Zimbabweans appeared in Hanover Magistrate Court on 25 August.