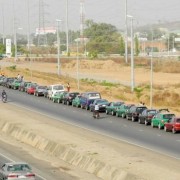 Former Nigerian President Goodluck Jonathan is looking good to some Nigerians who commented on social media after learning today that the country’s economy is officially in recession, Naij.com reported.

“I’m weeping for those who voted against GEJ,” Jacob Amidyere Adombire commented.

The South African currency could sink as low as 19 rand to the dollar this year, economists say, according to Buzz South Africa.

The two countries often see each other as competition. They’re more like book ends, said  Martyn Davies, managing director of emerging markets and Africa at the auditing and consulting firm Deloitte, in a Voice of America report.

Since Nigeria rebased its gross domestic product in 2013, the two countries have jockeyed for the economic top spot in Africa. South Africa recently regained the No. 1 position from Nigeria. But many global investors see them as part of the same Africa package.

“South Africa and Nigeria are the bookends, if you will, of the sub-Saharan economy. One’s misfiring, the other one’s in severe contraction,” Davies said.

Jonathan lost the 2015 election to President Muhammadu Buhari, in part because of perceptions of government corruption. Buhari campaigned by promising to end corruption, and in his 15 months in power, has launched aggressive action to investigate suspects in government fraud.