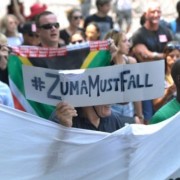 This includes a R7 billion reduction in the public sector wage bill over the next three years as well as a reduction in travel costs, entertainment budgets, catering expenses and restrictions on conferences.

The cuts come in the wake of a weakened South African currency and a shrinking tax poolto fund government. They are also a response to the auditor-general’s adverse report on the government’s wasteful and irregular government expenditure, which stood at R25.7 billion for 2015.

The cuts are commendable and long overdue. But they ignore one part of the wage bill the country can do without: deputy ministers. Although not a panacea, cutting down the number of deputy ministers would go a long way to helping government get its finances onto a more stable footing.

At the beginning of his second term in office, President Jacob Zuma appointed 35 ministers and 37 deputy ministers. This is a very large cabinet.