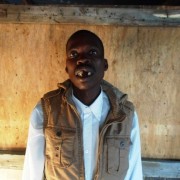 In November 2015, Zimbabwean born Innocent Ticharwa was knocked down by a vehicle in a hit and run incident in Addo township. Since then, he has been struggling to get compensation from the Port Elizabeth Road Accident Fund (RAF) office.

“I was crossing the road to where I was going to sell my brooms and mops. I just heard a heavy sound, then I passed out,” he says. “A passerby phoned the police, who in turn called the ambulance. I spent three days in Kirkwood hospital before being transferred to Uitenhage hospital where the doctors took an X-ray of my body.”

“I was eventually transferred to Addo hospital where four teeth were removed from my mouth … The doctors wanted to take all six affected teeth, but I begged them to leave the two that were not serious.”