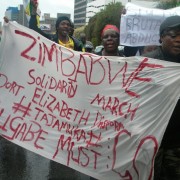 Zimbabwean nationals living in the Eastern Cape marched in Port Elizabeth on Saturday to express their anger at their government. The marchers demanded the immediate resignation of president Robert Mugabe blaming him for causing starvation and creating record unemployment.

The protesters, numbering about 200 including children, were not deterred by the cold and rainy weather.

They marched from the corner of Mount Road and Govan Mbeki Street. They turned into Russell Road where the group was joined by other Zimbabweans who are informal traders at the adjacent Main taxi rank. The group finally gathered at the City Hall where they were addressed by the organisers.

The march was organised by #Tajamuka, a group campaigning for Zimbabwean president Robert Mugabe to step down.

#Tajamuka’s South Africa spokesperson, Shelton Chiyangwa said “The aim of the march is [to express] solidarity with people in Zimbabwe and across the diaspora to demand Robert Mugabe to step down immediately and pave way for a new administration elected under free and fair elections. As Zimbabweans we have been patient enough.”