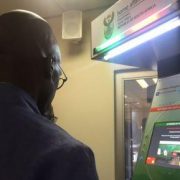 Johannesburg – Joseph Khoza could hardly contain his excitement after he finally received an ID book from the Department of Home Affairs after a 28-year-long struggle.

His ID had been blocked on and off since 1988 because of a department mix-up which repeatedly alleged that he was an illegal immigrant from Mozambique.

But on Friday, an excited Khoza collected his ID book from the department’s Germiston offices.

“This is a huge relief. I am very excited. My wife was saying we need to throw a huge party,” he said.