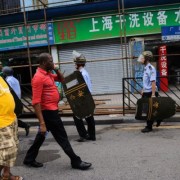 A young Gambian man has taken it upon himself to tell about his horrific experiences in China, in hope that it will inspire other Africans.
Every so often, stories of migrants perishing at sea or in other forms of transport all in the name of searching for greener pastures across the borders hit our media.

Just recently, bodies of nineteen Ethiopians were found in the back of a Zambian container truck, having suffocated to death. 76 more were found alive inside the container truck and are believed to have been on their way to South Africa. In May more than 700 people perished at sea as the boat they were traveling in from Libya to Italy capsized and killed the hundreds.

These are just but some of the heart-wrecking stories of migrants, who perish on their way to safer havens which they never reach. Some people, however, reach the other side, and the greener pastures they allegedly saw from a distance is not as green or as real.

Then, these people have to embark on a life of struggling to survive every day; searching for jobs to sustain themselves in a foreign land and saving a little to send back home. Those that are lucky get jobs and are able to stay on, others, go through worse experiences than they did in their home countries. With no job or money to survive abroad, they opt to return home. Some don’t even have enough to buy a ticket back home. They call for help from the same people they ought to be helping.