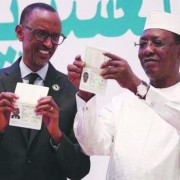 The image of Rwandan President Paul Kagame and Chadian President Idriss Déby proudly holding the first two copies of the newly launched pan-African passport at the African Union (AU) summit in the Rwandan capital Kigali this month marked the type of historic moment rarely seen at such gatherings, where outcomes are often measured in declarations or resolutions.

With the launch of the new pan-African document, the continent moved up a notch towards the free cross-border movement of goods and people – in direct contrast to Brexit, the decision by British voters to exit the European Union.

The AU will issue the new biometric or electronic passports only to African heads of state, foreign ministers and diplomats accredited by the AU headquarters in Addis Ababa, Ethiopia. It will bear the AU’s name and that of the issuing country. The plan is for African governments to roll it out to their citizens by 2018.

Many thought the move was well overdue, since one of the AU’s regional trading blocs, the 15-member Economic Community of West African States (ECOWAS), has been offering 90-day visa-free entry to member states’ citizens since the late 1970s.

One sign that the region is making progress in dismantling intra-African trade barriers is that while the AU was launching its new passport, Ghana, a member of ECOWAS, was starting to issue visas upon arrival to citizens of all 54 African countries. Prior to the move, Ghana offered visa-free entry only to ECOWAS citizens.

According to the African Development Bank’s Africa Visa Openness Report 2016, acquiring a visa is a huge challenge for travellers, with Africans still needing visas to travel to 55 percent of other African countries. Only 13 out of 54 countries offer liberal access (visa-free or visa on arrival) to Africans.

Convention on tourism for BRICS countries
Scroll to top