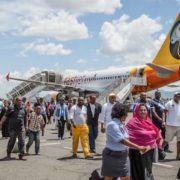 Overall international air travel to Africa has grown 5.6 percent this year through August compared to the same period last year, but North Africa has seen slow growth or even decline — people are scared to travel there — while East Africa has seen double-digit growth.

Algeria, Egypt, Morocco and Tunisia have seen little growth, ETurbo News reported. However, despite the weak growth,”North African countries still made it into the top 10 destinations in terms of volume of traffic but they have suffered from political instability and terror activities in the region,” said Olivier Jager, CEO of ForwardKeys.

Based in Spain, ForwardKeys focuses on big data and business intelligence for the travel industry, predicting future travel patterns by analyzing 14 million booking transactions a day.

Among the worst-hit are Egypt and Tunisia, CNN reported. Visitor numbers peaked above 14 million in 2010 but sank to around 9 million in 2015 following aviation disasters and turmoil following the 2011 Arab Spring, according to the U.N. World Tourism Organization. Numbers are expected to suffer as well in 2016.

Tourism tends to take up to two years to recover after terrorists attack tourists, according to David Scowsill, CEO of the World Travel & Tourism Council, CNN reported.
“People will come to Tunisia again… but right now (the country is) having a very tough time and people are losing their jobs,” said Scowsill.