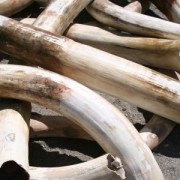 With populations of African elephants declining alarmingly in many areas because of poaching, habitat loss and conflict with expanding human populations, Botswana has become one of Africa’s most important sanctuaries in the battle to conserve the species.

The country harbours the world’s largest elephant population, representing about 40 per cent of all those left in Africa. The future conservation of savanna elephants will largely depend upon how they fare in their remaining strongholds. The people of Botswana recognise they are custodians of an import global heritage.

The decision to destroy ivory stockpiles aims to deter consumer demand, the illegal trade in tusks and elephant poaching. Its effectiveness is a matter for each country to determine for itself. Since 1989, some African countries have destroyed about 150 tonnes of ivory, with 25 destruction events in 17 countries. Despite this, 20,000 elephants a year are still being killed annually.

In Botswana, we do not destroy ivory because we have told communities that there is value in conserving elephants for eco-tourism and emphasising that the value of a live elephant should be upheld at all costs.

Burning ivory would demonstrate to them that the animal has no value. We prefer not to burn elephant tusks or rhino horns or any other wildlife product which can be used to show to the wider world the value of nature and the importance of conservation.