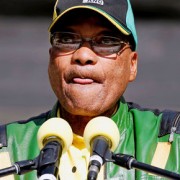 There has been pressure on President Jacob Zuma before. But never this intense, this cohesive, this justified. While only time will tell whether the deeply flawed leader of the ANC has finally over-reached, the volume of the calls for his head sound like a thousand vuvuzelas blasting away in a small room. The latest comes from trade union Solidarity whose Dr Eugene Brink issued the cutting statement below. Still, not everyone is convinced. There is a large bloc in the South African business community which actually believes Zuma’s most recent outrageous actions – reappointing the odious broadcasting chief; the attacks on Gordhan and the outgoing Public Protector – proves that his regime is stronger than ever. These worthies believe too much hope has been placed on Gordhan, and that he must be dispensed with before any meaningful economic reform can begin. Sounds to me like they are putting profits ahead of principle; feeding the crocodile in the hope it eats them last. The “voices of reason” in Zimbabwe tried that approach with Robert Mugabe. We all know how that worked out. – Alec Hogg

The time has come to oust Zuma so the country does not have to suffer under him any more.

Chairperson of the Solidarity Movement Flip Buys today said that South Africa simply cannot afford more of Jacob Zuma and he would have to go, or he would have to be asked to go. Zuma is busy expediting the end of his own reign, but he dare not be allowed to drag the country down with him. Zuma, rather than the country, should succumb. It is now just a matter of time before the ANC will turn against him en masse