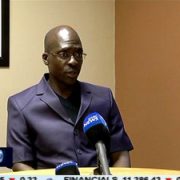 Pretoria – Home Affairs Minister Malusi Gigaba was forced to apologise to customers who had been at the department’s centre in Centurion since the early hours of Wednesday, but had yet to be assisted as the system was down.

He paid a surprise visit to the centre – and got more than he bargained for.
People wait for service at Home Affairs in Centurion. Following complaints from the public, Minister of Home Affairs Malusi Gigaba, left, paid a surprise visit. Here he listens to Joe van Tonder who points to his watch complaining about the lack of service. Picture: Masi Losi. Credit: PRETORIA NEWS
Gigaba listened to complaints of lack of professionalism and apparent laziness by staff at the centre and subsequently asked for forgiveness from the clients.

Gigaba was greeted with unacceptably long queues and a system that was offline for most of the day. The people who were in the queues informed him about the poor treatment they received at the centre on a daily basis.

Thato Montsho told the minister the staff at the centre were lazy and unprofessional.

Gigaba admitted he was shocked during the unplanned visit, which he said followed a tip-off about the poor service at the facility.