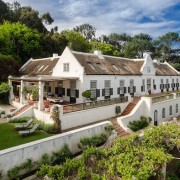 Cape Town is a Pole Star for so-called “swallows”, part-time expats, seeking respite while the mercury drops a hemisphere away in Europe.

The spectacular cityscape of cliffs and sea, dominated by Table Mountain, is undoubtedly part of the appeal. As is the climate — dependably warm but rarely more than 30C.

And with the South African rand reaching record lows in 2016, extended holidays to Cape Town are increasingly likely to involve a trip to an estate agent. Relatively speaking, international visitors are able to buy into the Cape Town lifestyle for “virtually unprecedented” prices, says Mike Greeff of Greeff Properties, an affiliate of Christie’s International Real Estate.

The rand has halved in value since President Jacob Zuma came to power in 2009. Since 2014, thanks to the diminished Chinese appetite for commodities, the rand has plummeted from 10 to the US dollar to 15.

Sales to foreigners in the Cape Peninsula soared 28 per cent over the November and December 2015 holiday season compared with the year before, according to PropStats, the database of the Institute of Estate Agents of South Africa. The total value of sales in January and February 2016 was up 21 per cent year on year.

“The standard of real estate available at these prices globally doesn’t begin to compare to what Cape Town offers by way of accommodation, size and quality of life,” says Greeff. In much of the Cape Peninsula, he says, high-end homes are available for less than $1m.

Brexit: Cheaper UK expats… and other small, possible silver linings for A...
Scroll to top