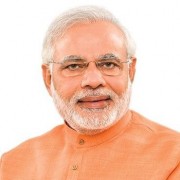 Modi is on his first state visit to South Africa, which is one of the legs of his African tour. He met with President Jacob Zuma in Pretoria yesterday before attending a rally in his honour at the Dome in Johannesburg last night.

This morning he is expected to open the Gandhi Museum in Pietermaritzburg, visit Phoenix, north of Durban and later join King Goodwill Zwelithini and Premier Willies Mchunu for a reception at Durban City Hall.

Lucy Sigaban, from the SA Welcomes Modi Organizing Committee, explains the importance of Modi’s visit to the country.

“His visit is critically around energy, around investment. For the first time a foreign leader has come to this space and he has had the ability to merge three continents together,” she said.

“He is a visionary in the ilk of Mahatma Gandhi as well as Nelson Mandela,” Sigaban added.

Addressing a huge crowd of mainly South African and expat Indians at the TicketPro Dome in Johannesburg last night, Modi said South Africa and India can achieve much more together.

Cape Town: why foreign ‘swallows’ are swooping on homes in suburbs
Scroll to top