Dehytray is a solar-drying solution for small and mid-size growers and food processors and home gardeners. Its convenient size and ease of use are backed by years of research into drying technology. It is durable, approved for food use, and designed for optimum drying of foods using natural solar energy. It is designed for drying grains, fruit, vegetables, fish, meat and more.

The company was co-founded by the husband-wife team of Klein Ileleji, a professor in agricultural and biological engineering at Purdue, and Reiko Habuto Ileleji, a Purdue alumna who earned her PhD from Purdue’s College of Education.

When they visited Nairobi during the summer to demonstrate the Dehytray at the 6th Agritec Exhibition and Congress, they received immense interest in the product from local farmers and processors, who quickly realized its benefits to the profitability of their operations. 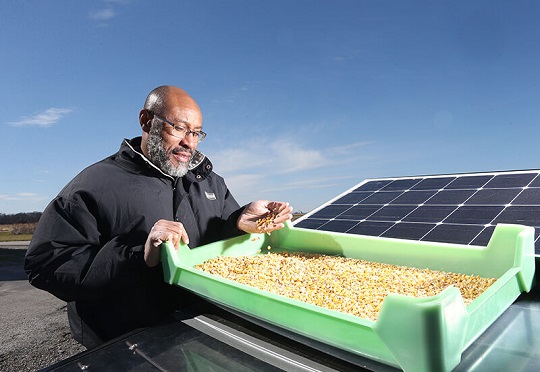 Securing distributors across wide-ranging regions, four continents and counting, is a challenging endeavor. The company implemented this partnership with BrazAgro, which will distribute the trays in Burundi, Ethiopia, Kenya, Rwanda, Tanzania and Uganda.

Throughout East Africa, the Dehytray will be used to dry specialty crops like leafy green vegetables, okra, mango, bananas, guava, tubers such as cassava and sweet potato, coffee, and grains, among other food products. The Dehytray meets a high hygienic standard for sun drying of crops, is quite portable, and can be adapted into a wide range of processing operations for the farm or small to mid-size processor.

The Dehytray was developed at Purdue’s agricultural and biological engineering program. The research was funded partly by USAID and USDA. Field tests on drying specialty (horticultural) crops and grains using the Dehytray have been carried out in the U.S., Nigeria, Ghana, Senegal, Kenya, South Africa and Peru. The Dehytray has been shipped to customers on four continents since it became available on the market in December 2018. 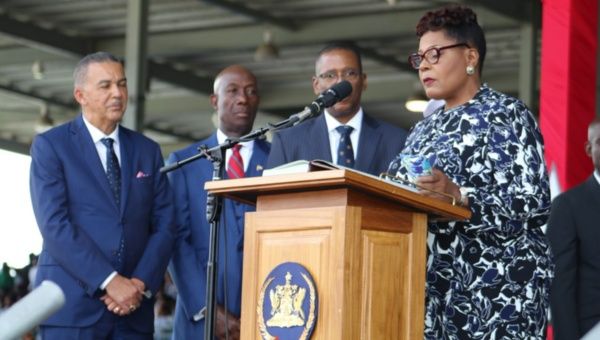 Paula Mae Weekes has been sworn in as Trinidad and Tobago’s first female President, after being elected by the island nation’s Electoral College in January 2018.

Chief of Justice Ivor Archie swore Weeks in at a ceremony at Queen’s Park Savannah in Port Spain. A retired judge from the Appeal Court, Paula Mae Weekes was the only presidential nominee proposed by the government.

Weekes graduated from law school and has a remarkable career in both public and private spheres. She was called to the Bar in 1982 and she served the Office of the Director of Public Prosecutions for 11 years.

In 1996 she became a judge at the Criminal Division of Trinidad’s High Court before being promoted to the Court of Appeal in 2005. She was then sworn-in as Justice of Appeal in the Turks and Caicos Islands for three years. She was also Chancellor of the Anglican Church, where she oversaw all finances.

Mayor of the town of Arima, Lisa Morris Julian, says she feels proud to welcome a female Commander in Chief of the armed forces. In a statement issued on Monday, Mayor Morris-Julian says she was impressed by the President’s track record as a trailblazer for women who hold executive posts.

She says the entire Arima Borough Council remains inspired by the President’s moving inauguration speech which encouraged nation building. She also expressed gratitude for the President’s call for citizens to get personally involved in their community’s development.

She made the comment as she said the President recognizes that leaders require the full support of citizens in the fight against negative social issues.

Kamla Persad-Bissessar, Trinidad’s Opposition Party leader, was thrilled about the Weekes’ inauguration, saying the country is now ahead of the United States (which has still not elected a female President).

In Trinidad, the president is the head of state and is responsible for approving bills before they become law, for “casting an eye on the operations and behavior of the Government,” as well as being the head of the armed forces.

Despite making history, Weekes is taking office at a challenging time for the nation, known best for its Carnival and for robust oil and natural gas exports. She replaces Anthony Carmona who leaves behind an extremely high murder rate — nearly 400 people in Trinidad have been victims of homicide in in 2017, according to the Trinidad Guardian. She’ll also have to take on an increasing unemployment rate, which rose to 5.3 percent in the second quarter of 2017, Trading Economics reported.

In her inaugural speech, she pledged to take on these and other problems head on.

Shortly after being elected, Weekes admitted she felt “completely terrified” about the idea of being president. “I can tell you that apart from feeling honored and humbled, I felt completely terrified. And that terror has not yet abated,” Weekes said.

Trinidad and Tobago has a parliamentary system in which the president is elected by an Electoral College, consisting of members of both the House of Representatives and the Senate.

With Weekes’ inauguration, Trinidad and Tobago becomes the only republic in Latin America and the Caribbean to have a woman head of state after Chile’s Michelle Bachelet left office on March 11.