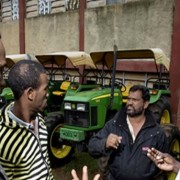 Ethiopian protesters stormed a Dutch-owned flower farm on Monday in Bahir Day city, Amhara region in North-West Ethiopia and caused damage estimated at about $7.8 million, in what authorities have linked to the deadly Oromo clashes.

Bloomberg reported that a “large group” of people invaded Esmeralda Farms Inc’s property on August 29 and torched part of it.

The farm is one of a series of foreign-owned plantations run by Israelis, Italians, Belgians and Indians that have fallen victim to the latest spate of violence since members of the Oromo and Amhara communities started protests in November.

Bahir Dar, the capital of Amhara region, experienced the deadliest clashes early last month when at least 30 people were killed in a single incident after government security forces clashed with protesters, BBC reported.

Human Rights Watch estimates that at least 500 people have been killed since the protests began.

The protests have galvanized two of the largest ethnic groups the horn of Africa.

Tanzania: No Foreigner Can Own Land in Tanzania, Except for Investment Only
Scroll to top