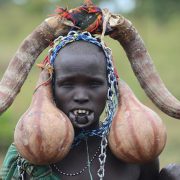 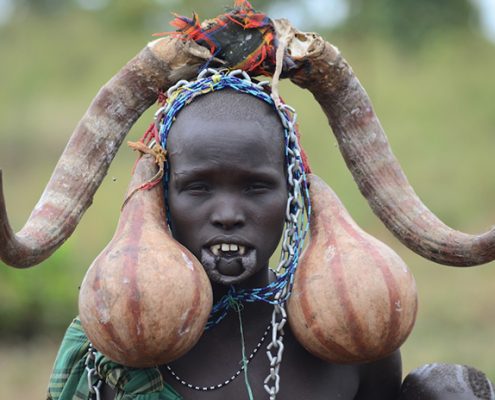 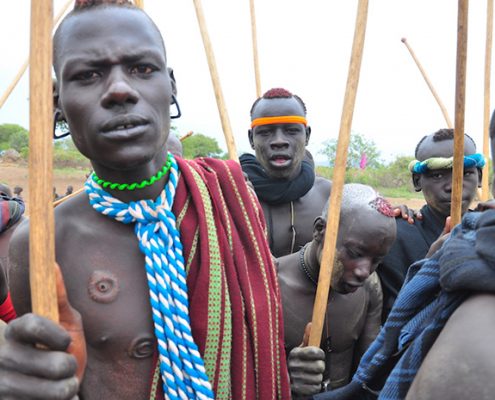 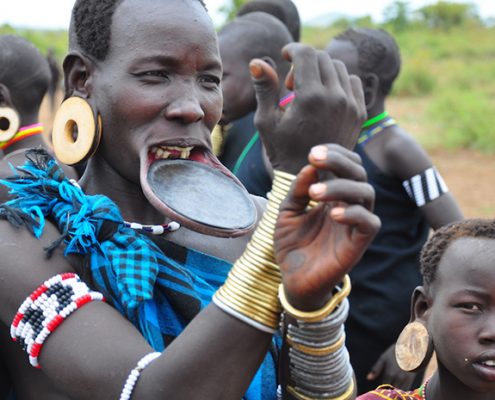 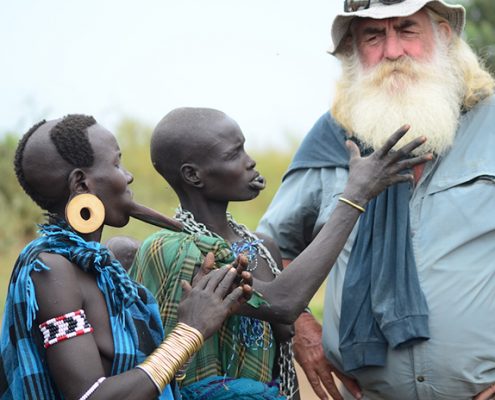 A journey to Chew Bahir, Ethiopia – Best told from the scribbles in Kingsley Holgate’s expedition journal…

Our Land Rover convoy enters Ethiopia at Omorati – we’re into the wild South Omo region with our clear ‘Living Traditions‘ objective to record and do continued humanitarian work with the nomadic tribes that make up one of Africa’s greatest, most colourful kaleidoscopes of tribal cultures.

We’ve arrived on the third day of the fierce Mursi tribe’s Donga Stick-fighting Ceremony fought with long sticks up to 2.5 metres in length. One of yesterday’s fighters has got his wounds all wrapped up in pieces of cloth. The ‘prize’ that two of the warriors will be fighting for is a beautiful Mursi girl, who has moved from the shade of a thorn tree to lean demurely against the bush bar of our Land Rover Discovery.

Looking on are more Mursi women with their clay saucer-like decorated lip plates. A Mursi girl at the age of 15 or 16 has a slit made beneath her lower lip, over time the gap is progressively stretched forming a lip loop large enough for a small circular clay plate. As the lip stretches, so larger plates are inserted until eventually the loop is large enough to hold a decorated clay plate up to 12cm in diameter, that without the plate inserted, can be pulled over the woman’s head. We’re told that the larger the lip plate the greater her bride price – a real whopper can fetch up to 50 head of cattle.

The Donga ceremony gets wilder. I jump backwards as an AK47 round goes off close to my ear. Down comes a fighting stick and then another AK round into the air. The tension builds! Some of the warriors have very dazed looks as they circle each other with their sticks at the ready. Our man, 45 year old Banna tribesman Mosku Guni, the armed wildlife ranger from nearby Mago National Park who is guiding us into Mursi country, is getting fidgety. “Time to go – the drinking has started,” he says. The fighting will continue for days and sometimes ends in death.