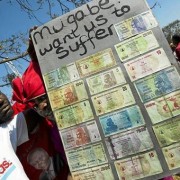 Anti-government protesters in Zimbabwe demonstrating against plans by the country’s central bank to re-introduce local banknotes were on Wednesday forcibly dispersed by police in the capital, Harare.

Dozens of protesters marched to the Reserve Bank of Zimbabwe (RBZ) to demand that the financial markets regulator reversed its plans to introduce ‘bond notes’ that will be linked to the U.S. dollar in October to curb rampant shortage of cash, Africa Reviewreported.

Police used tear gas and water cannons to disperse the currency protesters before they could reach the central bank’s headquarter.

In May, RBZ announced that it will start printing its own version of U.S. dollars noted to ease a serious cash shortage in the country.

The bond notes, which will have will the same value as their US dollar equivalents of $10 and $20, will be backed by $200 million support from the African Export-Import Bank, the country’s central bank governor John Mangudya said.

The protesters however fear that the move to print new money, as it happened eight years ago when inflation skyrocketed to over 500%, could wipe out people’s savings and pensions.