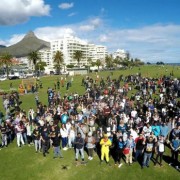 Despite the mobile game not yet being official in the country, Some South African tourism sites have become Pokémon Go hotspots, which translates to more visitors and more revenue, Reuters reported, according to Herald Live.

Pokémon players search for virtual creatures in the real world, using sophisticated mapping that requires them to physically go to local sites.

John Hanke, the CEO and founder of Pokémon parent Niantic, is a Google veteran. He was one of the founders of Keyhole, the company Google bought to start Google Earth, and had a hand in Google Maps before forming Niantic, according to Mashable. The company spun off from Google’s parent company Alphabet in 2015.

Pokéstops are submitted by users, so they’re based on places people go, Hanke said. “There are portals in Antartica and the North Pole, and most points in between.”

Henry, the resident Nile Crocodile, is one of the Poké stops at Crocworld Conservation Centre on the KwaZulu-Natal South Coast, Reuters reported.