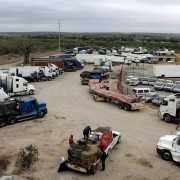 Minister of Home Affairs Malusi Gigaba says he does not blame Zimbabwean Customs for locking out South African goods from entering Zimbabwe.

Gigaba was speaking to the media at OR Tambo International Airport about the rollout of the Biometric Capture System.

Strike grips Zimbabwe as pressure on Mugabe grows
He said the number of people coming into the country had not been reduced by the installation of the biometrics system and the department expected more visitors to make their way to South Africa.

Speak up on Zimbabwe unrest‚ DA urges ANC government
But Gigaba did admit to the instability on the Zimbabwe side of the Beitbridge border post having caused a drop in the number of Zimbabweans entering the country.

Business slow in Musina in wake of Zimbabwean ban on some imports
He said the number of travellers had almost halved from fifteen thousand a day. He said the drop had showed in the money collected at the border post.

Gigaba said the Beitbridge port oversaw a similar number of travellers as OR Tambo International Airport.