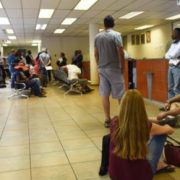 The Department of Home Affairs does not have plans to suspend the capture of biometrics at ports of entry over the festive season, neither is it authorised to employ a greater number of immigration officials to cope with the greater number of travellers expected.

The department revealed as much at a media briefing on Friday morning, which followed a meeting between the department and industry associations including the TBCSA, the Board of Airline Representatives of SA and the Airline Association of Southern Africa.

Director General Mkuseli Apleni says the Department will, however, look at extending the opening hours at some ports of entry to 24 hours. He also said for certain ports such as OR Tambo International, additional staff would be redeployed from areas where they are not busy, in order to help existing capacity cope with the extended hours.

For Africa’s millennial generation, the rules of engagement have chan...
Scroll to top