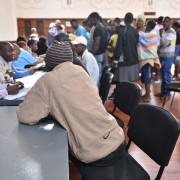 Asylum seekers The Citizen spoke to said ‘it seems to be up to your luck if you get asked to go to the “deportation room”‘.

According to two Malawian brothers who have been living in South Africa for more than 10 years, home affairs is “’randomly deporting” Malawians and Zimbabweans, and perhaps people of other nationalities too.

One of the brothers, Andy (not his real name), told The Citizen how, earlier this month, he and his brother went to the home affairs offices at the showgrounds in Pretoria to have their asylum-seeker papers stamped to allow them to live and work in South Africa legally for another three months. He claimed that he was then “sent into a different room than my brother. He got his papers stamped, but I was asked to wait in this other room; it was me and some other guys, about 15 of us. Our names were called from behind a section. They said ‘just sign these papers’, and we signed before we could read what was going on there. It was something like a letter and it was in my folder with all my papers from, like, 2010.

“We were told to wait. I wanted to know what was happening, so I walked out of the room and found an official, another woman, sitting somewhere else.