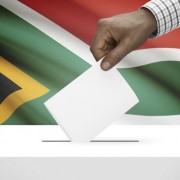 Cape Town – Home affairs will issue temporary identity certificates for free to those who lost their documents during recent severe weather around the country, Minister Malusi Gigaba said on Thursday.

Many victims of the flooding, fires, storms and tornadoes were anxious that they would not be able to vote in the municipal elections next week.

“We are and will continue to do all in our power to assist them in whatever way possible for them to return to their normal lives,” he told journalists in Cape Town.

Home affairs would set up mobile units in Gauteng, KwaZulu-Natal and the Western Cape this weekend.

Community development workers, employed by municipalities, were compiling lists of those affected. These lists would be passed on to regional home affairs branches.

Gigaba said it was difficult to determine how many had lost their documents at this stage.

He visited Masiphumelele in Cape Town on Thursday morning to see the houses that had been flooded.

In the Western Cape, almost 10 000 people had been affected by flooding in Langa and Phillipi, and three homes and at least 55 people were displaced in Gugulethu because of a fire, he said.