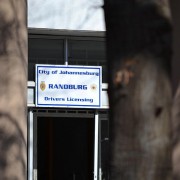 For between R2,500 and R4,300, you can get a learner’s and a driver’s licence from the Randburg Licensing Department – if you are prepared to bribe an official.

I have been twice to the offices and on both occasions I was offered licences in exchange for bribes.

We were alerted by a tip-off from a Johannesburg man whose wife had failed her learner’s test at the offices three times and, at the last booking, was offered a licence in exchange for a bribe of R1,000.

The man said he and his wife had refused the offer, but had noted the name of the official – a certain “Jo”.

His full name is known to GroundUp.