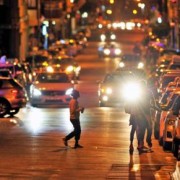 This is according to a Global Slavery Index survey released this year.

A21 Campaign, an anti-human trafficking NGO said via manager Katie Modrau that nearly 49 out of 100 people are at risk of being trafficked or are vulnerable to human trafficking.

More than 150 women were rescued from being sold into slavery in South Africa this year. This announcement comes as authorities clamped down on human trafficking during Women’s Month.

The women were “rescued” in operations across the country in co-ordination with authorities from the US and neighbouring countries.

Although human trafficking was described as a “serious issue” in the Western Cape, it was the North West, Limpopo and the Free State that were hardest hit with men, women and children, predominantly being smuggled into the country from Malawi.

“The nature of human trafficking is that it is a crime hidden in plain sight.

“It presents as something like an immigrant working on a farm, a drug addicted girl prostituting on the streets, a young girl from a bordering country working as a domestic worker for a distant relative or a friend of the family. But underneath, it is a foreigner lured to South Africa on the promise of work, and then exposed to exploitative labour conditions: a girl forced to take drugs in order to keep her on the streets against her will or a girl trapped in domestic servitude,” said Modrau.