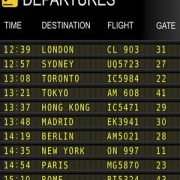 Johannesburg’s OR Tambo International Airport may be losing its hub and ‘gateway to Africa’ status, according to recent arrival stats for the first three quarters of this year.

Ross Kennedy, Chief Executive of Africa Albida, says there is an expanding market-led demand for other airports, both in SA and regionally. While OR Tambo remains a business travel hub, Kennedy believes there is a growing call for Durban and Cape Town in the leisure sector.

He adds that travellers who have already visited SA and now wish to experience other neighbouring destinations will avoid using OR Tambo if they can. “It is clearly evident to any traveller with two eyes that OR Tambo is under stress in so many ways, and that stress passes on to the traveller, impacting on the rest of the journey and holiday experience.”

Hans-Joachim Henckert, a disgruntled passenger, told Tourism Update that he believed Windhoek might become a great hub in the future. “After three consecutive OR Tambo nightmares, I choose, whenever I can, to fly to Cape Town via Windhoek. [There is] calm and less time to Cape Town,” he said.