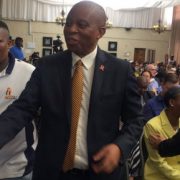 JOHANNESBURG – The Home Affairs Department says there can be no justification for statements made by Johannesburg Mayor Herman Mashaba on illegal foreign nationals living in the city.

While the department has noted challenges facing the city, it says this cannot be a reason for the generalisations made by Mashaba.

Delivering his 100 days in office progress report last week Mashaba said illegal foreign nationals living in Johannesburg must be treated as criminals since they came to South Africa illegally.

He ordered them to vacate the city.

The department’s Mayihlome Tshwete says there shouldn’t be blanket generalisation simply based on the means people used to arrive in South Africa.

“While we note those challenges, we can never say it’s justified for a person to make sweeping generalisations about criminality or even about the integrity of a certain people based on how or the type of movement they used coming into the country.”

“They’re holding our country to ransom and I’m going to be the last South African to allow it. I’ve got constrains as local government, because the national government has opened our borders to criminality.”

He said the inner city has been taken over by criminals.

“Every embassy that I’ve engaged with and shared with my plans, everybody agrees.”

Mashaba said those living in the city illegally and involved in criminal activity will be targeted.