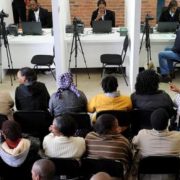 Pretoria – At first, Home Affairs officials required him to submit proof that he changed from woman to man, then later informed him that his documents went missing.

But the latest explanation that he could not be a man because he previously gave birth to a child drove Stephen Lombard over the edge.

Lombard has struggled for nearly three decades to get the Department of Home Affairs to reflect the new sex on his ID.

However, he found justice this week when the Gauteng High Court, Pretoria, eventually ordered the department to reflect his sex as male on his ID.

Lombard is a victim of officials referred to by Home Affairs Minister Malusi Gigaba when he said he was shocked to hear that they demanded proof from gays and lesbians or people who had changed sex.

“What shocked me the most was the attitude of the officials… What kind of proof are you asking for? That is shocking,” Gigaba said in June, adding that the matter was receiving attention.

Lombard approached the court after the department simply ignored his request, lost his documents or insisted on confirmation from his doctor that he was in fact now a man.

All these documents were given to the department, but nearly 30 years after his sex reassignment procedure, Boksburg-based Lombard was still waiting in vain as all his requests fell on deaf ears.

NIS: Many foreigners have obtained PVCs for Edo election
Scroll to top