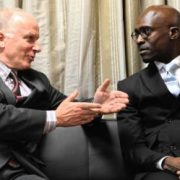 Gigaba said he held discussions with the ambassador of the EU to South Africa Marcus Cornaro regarding this matter.

He told a media briefing in Pretoria that he wanted reciprocity from these member states, because South Africa had already given them visa exemption when travelling to the country.

“We took a decision last year in South Africa that frequent travellers to our country will be given a three-year multi-entry visa.

“This is because if somebody is a frequent visitor to the country and spends their money in South Africa, they have not breached our immigration laws.