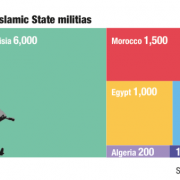 Mapping the Islamist threat across Africa

Violent Islamist campaigns have taken an acute turn since 2013 with Libya, Tunisia, Mali, Somalia, Kenya and Nigeria bearing the brunt of most jihadist attacks (see map below).

Tunisia, sick man of jihadism
“Look! We can follow the attacks in real time. It’s like being on the front lines!” says a pro-IS shopkeeper, flicking though his twitter feed, in the documentary Salafistes. Unlike Algeria and Morocco, Tunisia has not controlled travel to conflict zones. When islamist party Ennahda was in power after 2011 it encouraged young people to fight in foreign wars. How did this progressive country of just 11 million people send so many to fight for IS? Some point to the fierce repression of islamists, others to the high education levels that help plug well-connected youth into the global jihadi movement. There is also high unemployment, and despair at seeing how founding father Habib Bourguiba’s vision was betrayed by corrupt elites. The current government appears unable to get a grip on the interior ministry, with incoherent responses to the attacks on Sousse beach and the Bardo museum.

Read the original article on Theafricareport.com

Relocating a child with special educational needs
Scroll to top