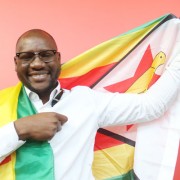 #ThisFlag protest leader, Evan Mawarire’s decision to seek refuge in South Africa over personal safety concerns is justified and will not quell revolution he has lit back home, analysts have said.

Mawarire left for South Africa two weeks ago after a Harare Magistrates’ Court declined to prosecute him on treason charges.

The cleric announced on Tuesday that he would remain in the neighbouring country for his personal safety after President Robert Mugabe declared him persona non grata for leading a campaign against perceived government misrule.

Political analyst, Alexander Rusero said Mawarire had done his part in demystifying Mugabe’s power and even if he stayed in South Africa, his contribution would remain indispensable. He said there was no struggle worth dying for.

“He (Mawarire) lit the fire and the forest will remain burning,” Rusero said.

“It’s the atmosphere he established in demystifying Mugabe’s power that will remain important. The extent to which government panicked shows how effective his campaign was. More Mawarires will come up. He is a Moses who led the Israelites out of Egypt, but a Joshua will come up to lead the Israelites to Canaan.”

Maxwell Saungweme, another analyst, said Mawarire had played his part and even if he stayed in South Africa, what he fought for would remain important and motivate the people to soldier on.

Shopping Malls Construction On The Rise In Nigeria, South Africa On Decline
Scroll to top