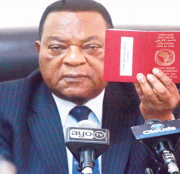 What’s red and gold and hailed by most economists?

The new African Union passport, unveiled this week at the African Union Summit in Kigali, Rwanda, promises a solution to a major drag on African trade: the red tape that makes it harder for African businesspeople, tourists and workers to travel around their own continent.

More than half of the 54 African countries require entry visas for other Africans, according to the Africa Visa Openness Report.

Those visas can take days or weeks to apply for, and they make everything more difficult — from hiring foreign staff to traveling on a weekend safari to selling goods across borders.