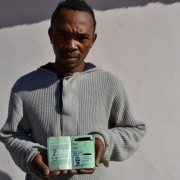 Luzuko Gijana (27) from Cofimvaba Magwala Village near Queenstown recently found out that someone else was using his name, surname and identification number.

Department of Home Affairs in Cofimvaba has called people to visit their offices to fix their duplication identification books. This comes after GroundUp sent a media inquiry regarding a Cofimvaba man who’s been waiting months for Home Affairs to fix his duplicate ID.