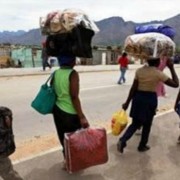 Most informal economic activity in most African countries involves cross border trade Informal cross-border trade constitutes the majority of informal activity in most African countries. In the 15-member Southern African Development Community (SADC), for example, informal cross-border trade makes up an estimated 30-to-40 percent of total intra-SADC trade, with an estimated value of $17.6 billion. Informal trade involves smuggling goods and avoiding formal border processes. It is practiced by companies of all sizes, by individuals unemployed in the formal economy,  and by people who have jobs but wish to supplement their salaries.