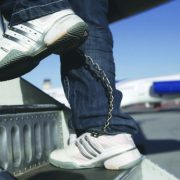 THABANI Ndlovu, a Zimbabwean national, arrived at the Trans Kalahari Border Control shortly after Namibia’s immigration offices closed at around 11PM on September 4.

Ndlovu, who lives in South Africa, was travelling with his brother and cousin in a sedan.

“We completed immigration formalities on the Botswana side, but when we got to the Namibian side the immigration office was closed for the day, although the gate was still open,” says his brother, David.

“The guys at the gate asked us for our passport, we presented them and we were allowed to go.”

On September 9, Ndlovu – who works in South Africa – jumped on an early morning bus to return to Johannesburg, via Gaborone.

Arriving at the Trans Kalahari Border Post, an immigration officer queried why he had no entry stamp on his passport. His attempts to explain away the anomaly did not help him, and he was promptly detained as an illegal immigrant. He was awaiting court this week.

Namibia’s tough approach, immigration experts said this week, is not helping the country rid itself of illegal immigrants through self-deportation as many fear spending time in prison or paying hefty fines.