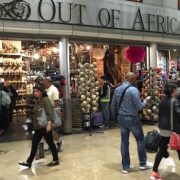 A story in The Economist entitled “Drawbridges Up” discusses geopolitical openness in a post-Brexit world facing a continuing refugee crisis, along with the possibility of Donald Trump’s presidency. Immigration lawyer Gary Eisenberg sees similar barriers going up in South Africa.

The new divide in rich countries, The Economist article says, is not between the political left and right, but “open” versus “closed.”

Is South Africa raising its drawbridges, or is it as open for business as President Jacob Zuma would have us believe?

Immigration lawyer Gary Eisenberg has watched for two decades as South Africa emerged from an era of enforced isolation, only to erect the same barriers to trade and capital flows that restricted the economy pre-1994.

“Barriers to trade and foreign direct investment are not always immediately visible,” says Eisenberg, recalling the U.S. and Japan’s strained economic relationship in the 1980s. “What the U.S. found particularly worrying was that, while Japan ascribed to low quotas and tariffs for the purposes of trade, its bureaucratic and cultural manner of transacting business constituted barriers to the importation of U.S. goods, services and capital.”

Eisenberg detects many of these same barriers today in South Africa – to foreigners’ entry, imports, and the personnel accompanying foreign direct investment.

Eisenberg challenged the government in High Court when it denied the Dalai Lama’s visa application ahead of Archbishop Desmond Tutu’s 80th birthday party in 2011. The Tibetan leader-in-exile was forced to cancel his trip. For Eisenberg, the case represented a flagrant disregard of the constitution and Bill of Rights. The blatant kowtow to China would not be easily forgotten on the international stage.

“The president flies around the world proclaiming that South Africa is open for business,” says Eisenberg. In reality, this openness has fizzled with Zuma’s ascension.