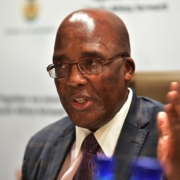 The South African Home Affairs Department has kick started discussions to align the country’s current marriage laws with the Constitution.

“We are starting a process to modernise our marriage laws to ensure that they adhere to the principles of the Constitution, which enjoins us to ensure that the State does not unfairly discriminate against any citizen,” said Home Affairs Minister Aaron Motsoaledi.

Currently, marriages in the country are governed by three laws all of which discriminate against some citizens.

Largely influenced by religion, the laws in relation to marriage prejudice certain segments of people and contravene the Constitution.

Current legislation does not regulate some religious marriages such as the Hindu, Muslim and other customary marriages that are practiced in some African or royal families.

The Recognition of Customary Marriages Act does not make provision for entering into a polygamous marriage with non-citizens. This poses a serious challenge when such marriages are entered into especially among the community members who are members of the same clan but are separated by a borderline.

The legislation does not make provision for couples who change their sex status but want to retain their marital status.

In light of this, government has sought to do away with the discrimination by crafting a new marriage policy.

It is envisaged that the new marriage policy will be taken to Cabinet, in March 2021, for approval after an extensive public consultation process has been undertaken.

From The Hippo’s Ears: Chad
Scroll to top